When Leaders Set the Example 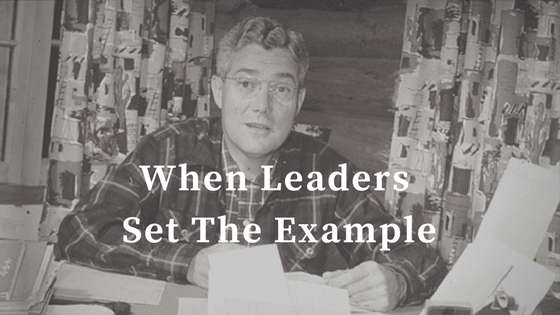 A 45-acre camp in the middle of a lake marked my entry into leadership where I was assigned the position of Boat Captain. Being responsible for the team that brought everyone to and from camp by boat was a big deal at 19 years old.

Jack Wyrtzen, the Founder and Director of the worldwide ministry, would faithfully show up each morning. As he walked from the boathouse to the auditorium for morning Bible Hour, he would stop and pick up any cups, cans, or candy wrappers left from the night before.

Everywhere he walked, to his office, dining room, beach, or ball court, he would personally pick up trash. I clearly saw the most senior leader in the organization leading by example.

“Coach stayed to make sure the locker room was clean. Some thought it was amusing to see the winningest coach in college basketball picking up trash from the wet floor, especially after a victory. But I found it moving, not just because he was conscientious enough to want to leave the room as clean as we’d found it, but because he was humble enough not to think it beneath him to do it himself.”
– Kareem Abdul-Jabbar, talking about the great Coach John Wooden

Good leaders set the example by walking the walk, not just talking the talk. Our willingness to do both the little and hard things needs to be seen not just heard. While it’s much easier to delegate or let others do everything that doesn’t fit the “Senior Leader” job description, good leaders lead by example.

John Maxwell calls this The Law of the Picture; people do what people see. In the military, setting the example is referred to as “leading from the front.”

“If service is below you, then quality leadership is beyond you.”

On the other hand, lazy and poor leaders want to be served and expect others to do what they are unwilling to do. Do as I say not as I do is what their example teaches.

“We are what we repeatedly do. Excellence then is not an act, but a habit.” – Aristotle

Whether young or old, parent or CEO, leading by example is one of the most powerful parts of your leadership character.

When Leaders Set the Expectation

The Secret Sauce to Becoming a Great Leader