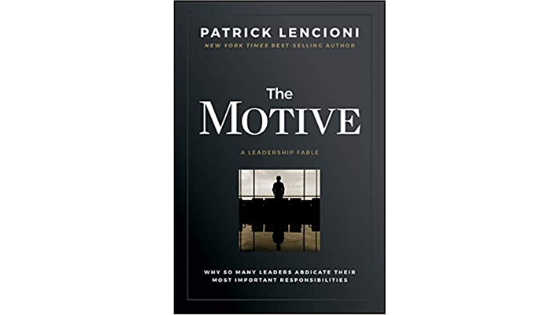 No Comments | Likes 0 | Tags Book Review, Patrick Lencioni, Why do you lead?
Share on FacebookShare on TwitterShare on LinkedinShare on Pinterest

While I was on the phone with a good friend, he asked what I thought of the new Patrick Lencioni book. I immediately felt left out and slow to the punch; a Lencioni book came out without me knowing? This is like missing the opening of an Avengers or Toy Story movie.

I probably shouldn’t admit this; as we were talking, I jumped on the Internet and, within moments, purchased his new book, The Motive. Patrick Lencioni is a very well-known leadership speaker and writer, and clearly, one of those authors whom everyone should read everything he has written.

You can buy tons of books that cover principles and topics common to leadership. This book is NOT one of those.

Like all Lencioni’s books, the first two-thirds of the book begin with a fable. In the final third, the author walks through principles, philosophy, and program, helping us to understand and digest the lesson found in the book. In typical fashion, the book is well written, the plot is full of surprises, and the leadership lesson is powerful. Not to mention, it is short and sweet and can be read in one or two sittings.

Most books focus on what a leader is; The Motive deals with “Why am I a leader?” The author says it this way, “Like so many people, I never stopped to consider why I should be a leader.” He then adds, “At the most fundamental level, there are only two motives that drive people to become a leader.”

The author concludes the fable portion of the book with “what ought to be,” versus “what happens normally.”

In so doing, he shows us what greatness could be. This book challenges each of us as leaders to look at our motivation for leading.

If we boil the book down to its essentials, The Motive looks at:
– “Reward” versus “responsibility” leadership
– The five omissions of reward-centered leaders.

This book is a must-read!

Here are some quotes to whet your appetite:

“One of these two motives for leadership will be predominant, and that motive will have a profound impact on the success of the leader and the organization he or she serves.”

“We can talk all day about what we’re supposed to do, but if we don’t understand why we’re leading in the first place, none of it will make sense.”

“It’s about doing the job, not just having the job.”

“Perhaps people will stop using the term “servant leadership” altogether, because everyone will understand that it is the only valid kind.”

“What is tolerated at the top of a company is often the ceiling of what can be expected deeper within it.”

“Most leaders today don’t generally see their role as a privilege or a duty. They see it as a right and a reward.”

“One focuses on getting elected and sees that day as the crowning achievement of his or her life. The other sees the election as the beginning of his or her attempt to accomplish something great.”

“If reward-centered, self-centered leadership becomes the norm, young people will grow up believing that this is what it means to be a leader. The wrong people will aspire to be managers, CEOs, and civic leaders, condemning society to more of the same for generations to come. This can’t be allowed to happen.”

Buy The Motive on Amazon