What John Wooden Teaches Us About Leaders, Managers, and Bureaucrats 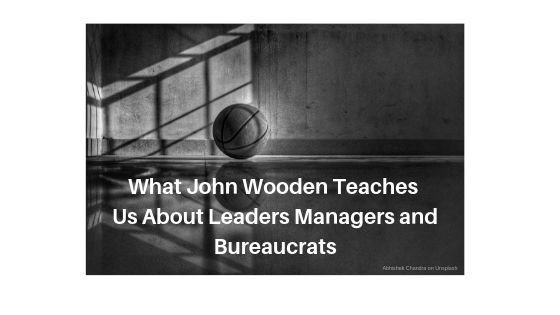 In today’s leadership culture, when we want to put down leaders, we simply call them managers. Often, we follow it with our favorite “leader versus manager” sayings. For example:

Second, we have a low view of people who don’t lead well. Bad leaders tend to make big messes. They destroy lives, reputations, careers, drive out good leaders, create bad cultures, and operate on program instead of principle. Because we don’t want to call them leaders, we need to have a term for these people.

Somewhere along the way, someone picked the word manager and started using it in a negative context, and the snowball started rolling. And it’s the “in thing” to use the word manager.

We get a lot of “leader versus manager” nonsense, and now a great word and essential aspect of leadership is getting a bad reputation.

There are very few coaches that rise to the level of John Wooden. His reputation as a coach, leader, and shaper of men is impressive.  Yet he scripted every practice right down to the minute. He even wrote a plan for every practice on 3×5 cards. When working on a drill for two minutes (it was no more and no less) he used a stopwatch hung around his neck to ensure it. Wooden followed the plan righteously.

He made his players tie their shoes in a precise way. If they didn’t follow his way, he wouldn’t let them on the floor. He had a lot of rules and enforced them rigidly. There are numerous books written about the “leadership” of John Wooden.  Most of his “leadership” is best described by the word manager, yet he was one of the winningest coaches in history. Even more importantly, he was an incredible leader of men. He changed their lives and he taught them to be both men and leaders. His leadership example – impact on his school, college basketball, sports in general, and millions of people – has become legendary.

John Maxwell tells of the life-changing privilege of being mentored by John Wooden. Kareem Abdul-Jabbar wrote a whole book about Coach Wooden. He loved and respected Coach Wooden more than any other male figure in his life and considered him a surrogate father. Kareem arranged his life so he could be at Wooden’s side the day he died. Thousands of people came for his memorial service.

But it wasn’t just Wooden’s leadership that won games or made him a leader, it was primarily his management.

Think about this with me:

Leadership and management are two sides of the same coin. Both are important, and great leaders need both.

I believe there is a test to measure the depth of one’s leadership knowledge, understanding, and philosophy.  It can be found in how one uses the words manager and management. These words are very critical elements of leadership, so to use them disparaging exposes a weakness in one’s understanding of good leadership.

But now we have a problem. If we can’t use manager or management, what word can we use for bad leaders?

All of us hate bureaucracy and the bureaucrats that run them.  Those two words have a history of referring to those with poor leadership and management.  So, from this point forward, let’s call it what it is, bureaucracy or bureaucrat!

“No one loves a bureaucracy, and no one aspires to be a nameless, faceless bureaucrat. Somehow, even as the modern ideal of leadership was being developed in recent decades, management was disparaged.” – Al Mohler

The next time you’re tempted to put down the word manager, DON’T! Leadership without management isn’t leadership, and management without leadership is bureaucracy.