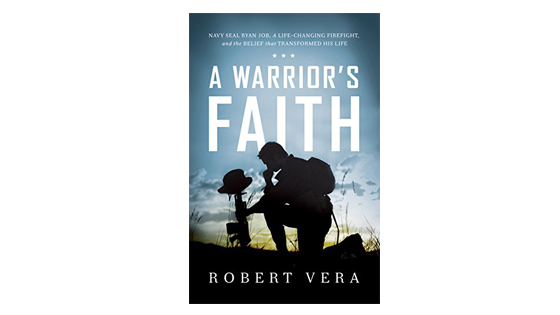 Any time you buy a book or see a movie, there is anticipation and a bit of concern on how good it will be. In this case, A Warrior’s Faith showed up on an Amazon Kindle special. Knowing that military books are often good, and usually have good leadership content, I purchased it. And did I hit the jackpot!

A Warrior’s Faith is about the life of Navy Seal Ryan Job and the life-changing event that transformed his life. If you have watched the movie American Sniper or read Chris Kyle’s American Sniper book, you were introduced to Ryan. He was on a rooftop in Ramadi, Iraq, providing overwatch when he was shot in the face by an enemy sniper. This is where the story begins, and it gives us an incredible look into a powerful faith journey.

“The length of one’s life does not determine one’s legacy; rather, it is fashioned by those we influence.” – Robert Vera

Leadership is about people. Great leaders are self-effacing and care more about others than themselves. While this book isn’t about leadership, it is an incredible example of a guy whose life impacted the lives of countless others. Ryan Job’s life was a living example of what leadership is.

“Seeing someone in need of encouragement and being that encouragement despite his own suffering. This is the heart of servant leadership.” – Robert Vera

This book is well written; not too wordy and builds upon each chapter. Have you ever watched one of those painters who puts paint all over a big canvas; then, in just a few minutes, an incredible painting is revealed? The author has a picture in mind, and each chapter gets you closer to the big reveal. By the time you get to the end of the book, you have a complete picture of a true warrior. Unlike most military books, this one accentuates a Navy Seal’s life and its impact on others. And the impact this soldier had is profound.

“In his short life, Ryan Job experienced selfless acts of love and devotion wrapped in the brutality of war. His transformation was not a result of his being wounded. Rather, it was because he accepted Christianity as his next and final adventure. It was a lifestyle that changed his thoughts, which changed his beliefs, which changed his mind and actions.” – Robert Vera

As soon as I finished reading this book, I did two things:

I promise you, once you pick the book up you won’t put it down.

You can get the book here: A Warrior’s Faith